Grab your copy of Pride & Justice 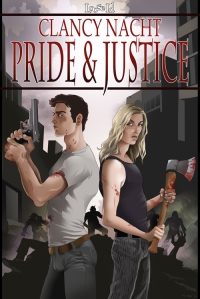 A percentage of the earth’s population has transformed into surprisingly functional zombies who returned to work the next morning as if they weren’t undead monstrosities. Justice Kinkead, officer in an elite zombie fighting force, gets called out when good zombies go bad, putting down the brain cravers and safeguarding the new economy. After several of his partners succumb to unfortunate deaths, Justice figures he’ll go it alone…until he’s assigned a mysterious and sexy new partner, Merlin Pride, who seems to know more about the zombies’ origins than he’s letting on.

Merlin also seems to sense that Justice needs a good screw, but it’s complicated: Justice still lives with his undead ex-boyfriend. Can Justice make peace with his past? And if he does, should he take a chance on a man who may have something to do with destroying civilization as they knew it?

On Amazon: Pride and Justice

On All Romance eBooks

One thought on “Grab your copy of Pride & Justice”