Virtue signaling and the rise of the catfish

You’ll be hard-pressed to see me coming out as against own voices, though I imagine that to an extent, people will take from this as they may. What I’m actually against is the virtue signalling and the accompanying lack of engagement with marginalized people.

This is a pattern and it’s something that I think we should talk about, particularly when it comes to the push against exploitation of the stories of marginalized people, our part in it, and why catfish seem so damn appealing.

One of the Good Ones

I’m putting that the nice way, but this is the problem that we have when it comes to microaggressions and when we hit walls when looking for jobs and aren’t “a culture fit.”

Because that’s the thing, an authentic own voice is the expression of its culture and it can be uncomfortable. Have you gone into black spaces and not argued with the people there about #notallwhites? Have you engaged with the queer community beyond reading or writing mm romance? Have all the queer people you were close to turned out to be catfish?

When it comes to experiencing an authentic voice, there is often that moment of the unfamiliar and not to insult romance, but this is a genre that likes its tropes. The familiar and the happy ending are the hallmarks of the genre, so you ask me if I’m surprised that frequently actual gay men are ignored in favor of a palatable queer in mm romance? Not really.

But I’d be lying if I didn’t say a little piece of me dies whenever a big faker has been lauded for months as own voices while actual queer people are scraping to get by. (Or are actively threatened with a lawsuit, as Brad Vance was.)

The catfish stories so often fall right in line with the tropes that readers want. Actual queer people have fairly dull lives, often given to depression or acting like, you know, regular people.

A catfish can give you that double hit of making you think You Are a Good Person for supporting own voices, while also pretending at authenticity that more or less squares with what you want to believe anyway.

It’s why Fox News exists, to give people news in a way that they want to believe it.

No one’s blaming you, but this doesn’t happen on its own

And here’s the thing about where this leaves us. People taken in by the catfish rightly feel like victims, but their victimization comes at a cost not just to them, but to marginalized readers and writers. It’s not just that the queer writers are toiling in vain, it’s that what we all hear is: We don’t want to hear from you, we prefer our great big faker over here who is feeding us what we want to believe about your lives.

It’s disheartening, and in particular with this latest round, a lot of people were signaling their virtue by being openly hostile to anyone who dared question. I know that’s also a side effect of the manipulation, but the cost was that a lot of marginalized people were afraid—threatened with legal action, or an internet pile on. And for what? Again, lack of discernment and an over-eagerness to be seen as virtuous.

I don’t know how many times I’ve watched people (mostly other women, often other authors) say that AFAB (assigned female at birth) shouldn’t be writing mm. On whose authority are you saying that? I’ve seen a lot of social justice malpractice in my time, but if you’re going to ignore the whole history of how women have been marginalized, you’ve lost the plot.

But aside from displaying (often internalized) misogyny, you can’t tell people what to read or enjoy. It’s possible, even probable, that the mm market exists mostly for the pleasure of women. Why? Because it’s romance, ffs. It’s one of the few domains that are traditionally for women, often by women. You see where the trainwreck is about to happen, but we all act mystified when it does.

But you know what? I get it. Women’s lust is gross. It shouldn’t be allowed. These people are mothers. Ew, right?

I have a solution for all of you: if it bothers you so much that women are enjoying mm romance, refuse to sell to them. Show us all how to do it.

The category you are talking about is Queer Lit

Because this is a genre for romance, because it’s mostly women, because people want to do better and feel like they’re not harming anyone, they look for ways to be good. To feel like their fantasies aren’t diminishing anyone. But it’s romance, so it is fantasy and so they look to find an authentic voice that matches what they want, and that’s… often not as it appears.

This is not to say we shouldn’t support own voices. Absolutely not. I do and I will, though I don’t usually make quite as grand a fuss over it as some. It’s just part of being a writer and a human and someone who wants to know about life, the world, and people in it.

When I read own voices sci-fi, I don’t expect that it’s not going to be sci-fi. Romance is going to be romance. It’s likely to be fanciful and possibly gloss over reality. It can also expose some internalized homophobia, and certainly when that happens it should be called out, but here’s the thing—much like misogyny isn’t the exclusive province of men, queer people have also inherited the fleas of a pretty toxic culture. Excluding AFAB people won’t fix that.

I started writing after my dad died. My first novel was a very angry horror novel where I was working through my feelings. It didn’t have to do with my dad directly, but it was therapeutic as I dealt with my feelings.

Later, I wrote fanfics, mostly to entertain friends, but I began to weave other themes into the stories. Some people journal, I wrote stories. I made friends in fandom, including my cowriter, at least in part to the slash fandom that we bonded over.

I met a full spectrum of queer people in that fandom, just as I’ve made some great friends in mm romance. While there were and are cis straight women who enjoy slash or mm romance, in my experience, they aren’t the only ones writing or reading it.

Some AFAB have really been able to explore and find their truth through their writing and/or being involved in the community. How dare you judge their path?

I’m not saying hurt people or those wandering don’t hurt others, but chopping off their avenue for exploration is pretty extreme.

And it’s not as if gay men haven’t adopted or fetishized women.

I’ve thought, not for the first time, that there’s a real connection between me and my (as I later found out gay male friends’) connection to Golden Girls and horror movies. The plucky outcast women are featured, even winning against the patriarchy and toxic masculinity. Diva singers are fabulous, unabashedly flamboyant; it’s the full fantasy but also the fully tragic life of having it all but not being able to enjoy it fully because of how men treat you. 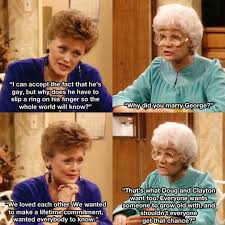 There’s certainly a conversation to be had here about how gay men were often kind of forced to adapt to the culture of m/f and chose to identify with some of these women, however…at this point in the queer community, gay men are often serving as the avatars of the queer community.

It’s pretty natural when you think about it. Most of entertainment culture has been traditionally focused on promoting men’s interests. If you loved Harry Potter and were female, you could either decide you identified with Hermione, who wasn’t the main hero, or just go ahead and identify with Harry, even though he was a boy. To be the hero in books, often women had to live the fantasy of the man she was reading about. It’s natural for us to do that. We’ve been trained for that since the jump.

But even now, look at the dearth of popular lesbian media or lesbian bars. It’s getting better, for sure. But right now, it really is gay men who dominate the queer cultural sphere, and as the tip of the spear right now, this is how portions of the spectrum are trying to hold up a mirror to themselves.

I imagine it’s the same for a lot of us. In a fairer world, maybe when I first saw a butch lesbian it wouldn’t have been explained away as “tomboy,” but it was. Gay men have been invaluable to my evolution in ways I didn’t even know about until they came out later.

When it comes to queerness, stealth is a myth

And this is where I’m going to leave it for now. There are a lot of issues that I didn’t talk about, including QoC because that’s not been my experience. I’m speaking on what I know, what my thoughts are, and the queer people around me. If you got all the way here to be smug at me about my whiteness, I know. You don’t need to perform that allyship right now. I’ll likely reblog/retweet/reFB anyone’s essay on the subject who writes about their experience.

But also if you’re here to question my queer street cred, no. I wasn’t bullied. I actually don’t know how many queer people have been bullied in the way you’ll read (or I’ve written, even) in a romance novel. Bullying often takes subtler forms, like being othered and isolated. Not fitting in and not knowing why.

I look back on my life and I think, “I wasn’t bullied. I had friends.”

But listen, I was surrounded by POC and queer folk. I wasn’t aware that some of the folk were queer until after we’d left school and it was safe for them to come out, but the thing is, we all clustered together for a reason.

I went to school with Jim Parsons of “The Big Bang Theory.” If you’ve seen him speak about his experience in high school, what he says is true, he says he had his own crowd and wasn’t really bullied. It’s not a sexy story, and certainly, we were lucky to have gone to a really large school, but inasmuch as white people love their slavery movies and entertainment that exploits black pain, queer people get that, too.

Not to say there aren’t horror stories because there are, and when things go bad, shit gets seriously horrific quick. But bucking the gender norms in any way, even the ways that I thought were subtle, can very quickly put you in the out-group.

This is why the queer perspective is a little different. It doesn’t always conform to expectations.

Your performative allyship is undermining

Which is why it is often so painful to see a catfish slither in, conform to some of the worst of cis straight expectations, and get lauded. It’s pretty much what we’re used to, being gaslit and ignored for not fitting in an expected box, but it strikes to our very core that we’re apparently not even good at being queer.

Personally, I’d rather people be honest and just like what they like. The whole catfish thing just exposes the ugly truth of performative allyship, and it’s just depressing.

2 thoughts on “Virtue signaling and the rise of the catfish”